My battle with impostor syndrome and three steps to help you fight it.

I experience impostor syndrome regularly and have battled against it all my life. My first conference talk was on the subject, and now my first blog post. It made me reluctant to write a post, to begin with, and apply to conferences. It has held me back time and time again. Now, I have come up with tricks to win the battle and wanted to share my experience with you.

What is Impostor Syndrome?

An internal experience of intellectual phoniness, despite outstanding academic and professional accomplishments.

Their study focused on high achieving women, but later studies found any gender can experience it.

Whatever you want to call it, it is when you feel like a fraud, you are getting away with something, and you do not deserve your achievements nor opportunities, and fear others find out.

In September 2019, I did the locknote for DDD Sydney.

It's our pleasure to introduce our locknote speaker, @meliss_houghton, part of the fabulous @DDDPerth crew!

Melissa will be sharing her experience dealing with impostor syndrome, which I'm sure many of us have experienced.

When I first heard that they wanted me for the locknote, I thought it must be a prank!

It was my night last in Perth, before moving to Melbourne. I was leaving my job as a Software Developer at Bankwest, where I had worked for four and a half years. I was about to start a new role as a Senior Developer at Telstra Purple. A company I had always looked up to as employing brilliant people. DDD Perth had just finished, and I was talking to colleagues and friends over a few drinks. It was the last time I would see them and, people were sharing words of encouragement and praise from their time working with me. As kind words were said to me and so much was happening, I was having an intense battle with impostor syndrome.

It was during this battle that Michele from YOW, who was sponsoring the talk, approached to tell me they wanted me to do the locknote at DDD Sydney!

My brain immediately jumped to thinking it must be some sort of conspiracy. No way colleagues I admired and people in the tech community that I looked up to, thought this highly of me. My subconscious was telling me that they must be up to something.

I was experiencing impostor syndrome.

It was not the first time I have experienced impostor syndrome, and yet it continues to occur; it is an ongoing battle.

When I was at Bankwest, I had a secondment as the Technology Graduate Program Manager.

The most common problem the graduates had was feelings of not meeting expectations and questioning why they got the role. I talked them through their feelings and helped them to battle against what they were experiencing, which was impostor syndrome.

Ironically, in that role, I felt like an impostor. I had finished the graduate program before moving directly into managing it. I had no prior management experience, and half of the graduates reporting into me were older than me. Not that age matters, but it was another factor that fed into my impostor syndrome.

How did I get through this? How did I ensure that these feelings would not hold me back? How did I help others do the same?

Three Steps to Win the Battle

I came up with three steps to win the battle with impostor syndrome:

First, I learned how to recognise impostor syndrome as it was happening. After I acknowledge it, I rationalise the situation; people were not out to get me, there was no conspiracy, and what benefit would they have if there was? Lastly, I reflect on my accomplishments; I have worked hard! I use positive thoughts to empower me to fight against impostor syndrome, flip the beliefs and prove myself wrong!

The motivation to fight impostor syndrome encouraged me to say yes, accept the chance to give the lock note, and many other opportunities.

Recognise: Am I Experiencing Impostor Syndrome?

70% of people experience impostor syndrome at some point in their life. Anyone can suffer from it, but some are at higher risk.

You are more likely to experience impostor syndrome if you are or have been:

Graduate students were the subject of several studies I found. The studies found them to experience impostor syndrome at a higher rate because of the constant learning environment. In tech, we are continually learning new things, and I believe these same theories apply to us.

How does Impostor Syndrome Present Itself? 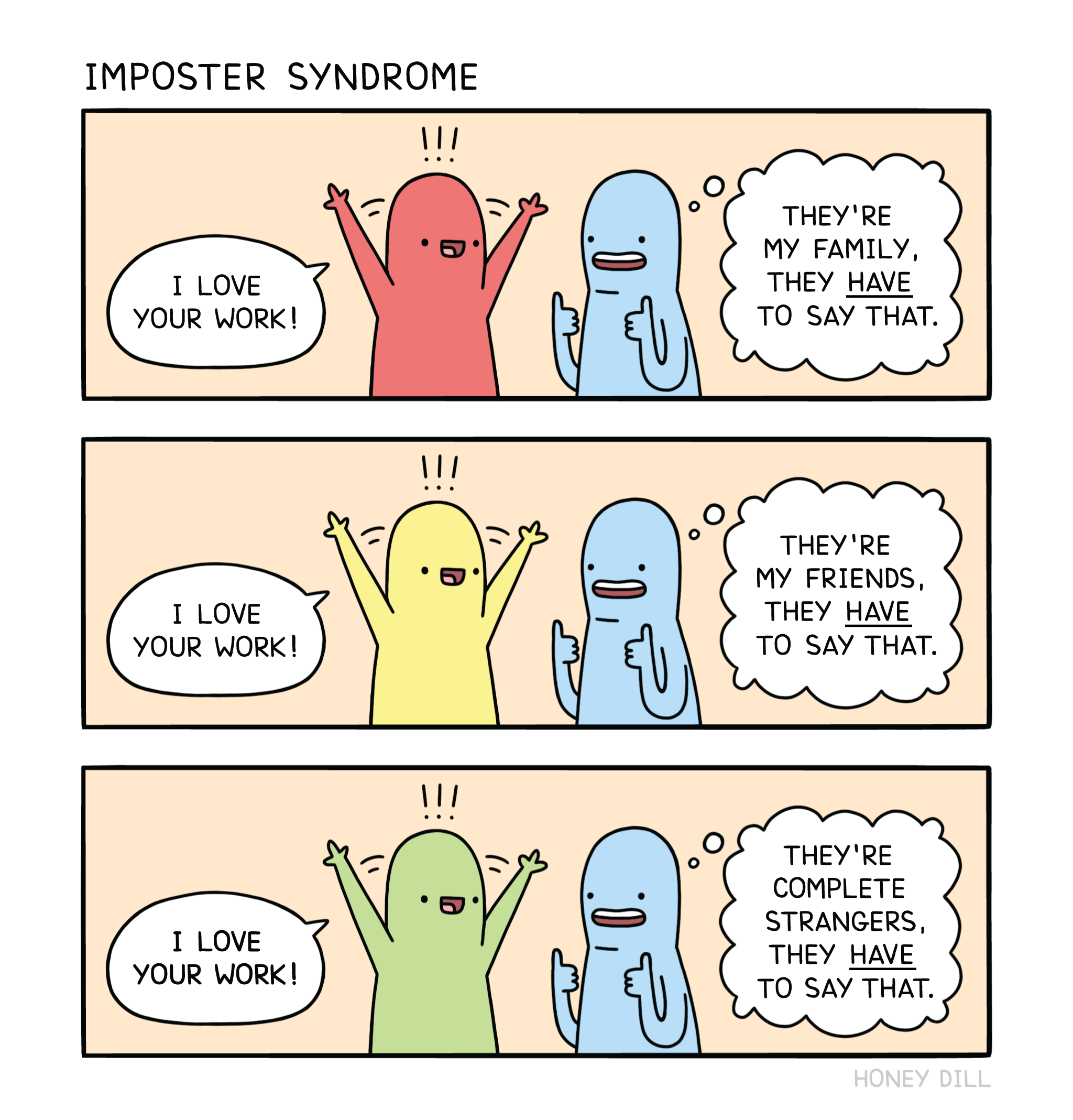 We so-called impostors have trouble accepting compliments. We make excuses say “they have to say that” and brush it off, not recognising it for what it is.

When it comes to completing work, we either overprepare or procrastinate. We can be workaholics and perfectionists. Or avoid tasks altogether for fear of failing or not living up to expectations. Those that are naturally talented, or continuously told they are the “smart one”; get frustrated when not able to grasp concepts right away and, often, give up.

If we notice ourselves or our friends doing any of these things, they might be experiencing impostor syndrome.

What are the risks?

Impostor syndrome can lead to:

When I was the Graduate Program Manager, I took on more responsibility than I had ever had before. I had 14 direct reports and was entirely out of my comfort zone. Outside my role, I was trying to maintain involvement in volunteer groups and organisations. I had over-committed myself, was losing motivation and no longer believed in my abilities. I was not happy in my role nor my life; I was perpetually overwhelmed.

Thankfully, after a while, I recognised what was happening and cut back on commitments. However, negative thoughts and feeling of being an impostor remained.

Rationalise: Am I an Impostor?

How do you rationalise those thoughts and feelings away? Think through, does this make sense?

How likely is it that someone is going to run up here and pull me off stage because me giving the lock note was some sort of joke? Not very likely, I hope.

Share the feelings! Talk about it! Educate someone whom you think might be experiencing it. We can use conversations to get affirmation from others that it is sensible to feel like an impostor, but our feelings do not reflect the truth. 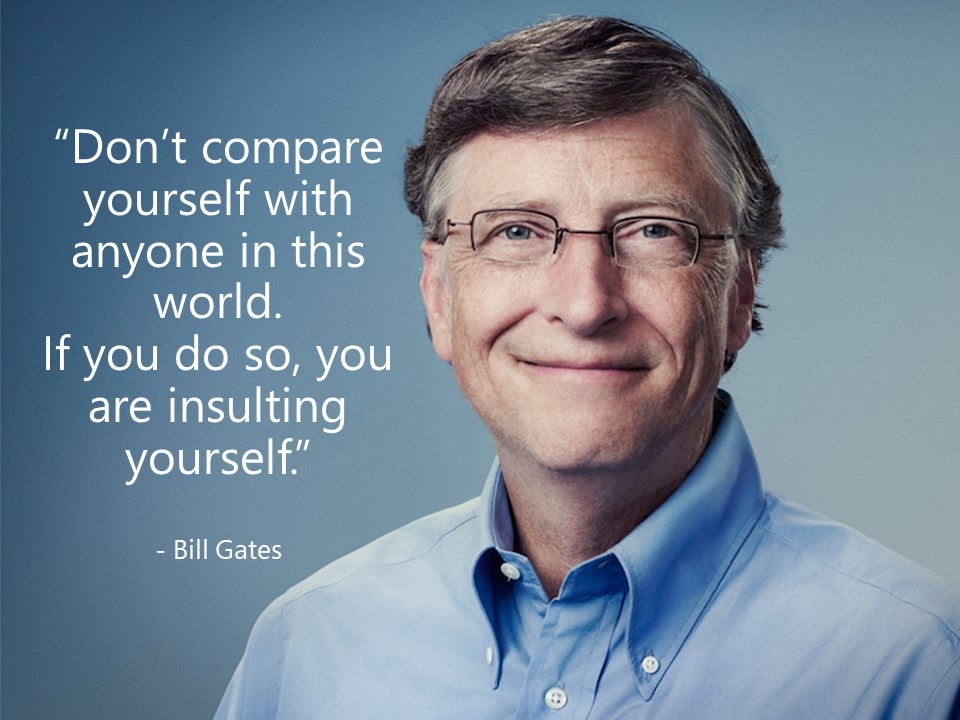 Stop comparing yourself to others!

Think, how did you get to where you are; was it luck or was it the hard work and effort you put in?

Someone gave you that role, that job, that opportunity for a reason!

You are great for your reasons and talents. They hired you not because they expected you to know everything but because they saw the potential in you.

In reality, most of us don’t know what we are doing. I don’t know how to write a blog or do a conference talk, yet I am doing it.

It is ok not to know everything. Use the power of not knowing as motivation to achieve more. Not knowing gives us the ability to think outside of the box and do things no one else has ever done.

Challenge negative thoughts and practice positive self-talk. Flip limiting believes beliefs and use it as a challenge, a motivation to prove yourself wrong!

Remember, it is ok to fail. The important thing is to keep learning.

Even after I rationalised the negative thoughts of being a phony Graduate manager, I was still not happy in the role. I was able to see past the feelings of being a fraud, to recognise that I was doing well, but it was just not for me. I cut the secondment short and moved back into a developer role. I use my experience as a positive one, to motivate me, and I reflect on it as an achievement.

Reflect: What are the Facts?

I flip the negative thoughts and feelings that impostor syndrome throws at me through reflection.

I keep a work journal where I take notes on what I have done each day, making sure to note accomplishments, no matter how small. From completing a card to winning an award, I write it down. Later, I review my journal and am always surprised about how much I have accomplished.

In times where I feel like I am not making progress, or I do not belong in my role, these little notes help to prove otherwise and turn negative thoughts positive.

Feedback is a powerful tool to combat impostor syndrome. Collect feedback on yourself and give it to others. Use the feedback to reflect and find out the facts of the situation.

When the Graduates would share feelings of being a fraud, I gave them the assignment of collecting feedback from their teammates. They were often surprised by the result.

One Grad told me she did not know why the Senior was spending so much time helping her. She said she felt bad for wasting his time.

When I spoke to the Senior, he said she was doing well. He was proud of her progress; she picked up the technology quickly and was contributing to the team. He felt sorry for not giving her more of his time.

It was all a matter of perspective.

Expectations Grads had put on themselves did not match reality. Finding out what the reality was, recognising that it did not match their internal feelings, rationalising and reflecting, helped shift the negative thoughts.

If you are on the other side, tell people when they have done well, even if they brush it off, continuous feedback can help to wear negative thoughts down.

When I was a graduate, I shared an interest in leadership roles with a colleague. When the Graduate Manager role came up, he approached me and told me I should apply.

My immediate reaction was “no way; I would not be able to get the role nor be any good at it”.

But he believed in me, and that made me believe in myself. With his support, I applied and was successful!

A few years later, when I wanted to move to Melbourne, I applied to Senior positions, despite being a midtier developer. I did this because my manager had told me I was reaching Senior level. Without him telling me that, I would not have had the confidence to apply for those roles.

If you see potential in others, encourage them. Reach out, be a mentor, provide feedback and help them to reflect on their accomplishments.

How Can We Battle Against It?

Impostor syndrome can be beneficial! We can use it as motivation!

Turn the negative self-doubt into a challenge. Prove the internal monologue saying you are not good enough wrong. Even if it was some sort of prank to get you into that position, it is not a very good one if you do it confidently and you do it well.

Remember it’s ok not to know everything, and it is ok to fail. Just keep learning and do not let impostor syndrome hold you back.

Use the three steps to win the battle with impostor syndrome:

Recognise impostor syndrome in ourselves and others. Keep an eye out for those who are at higher risk and those who make excuses, over-prepare and procrastinate. We can support one another to try for new opportunities and celebrate success.

Rationalise the situation and think through the internal feelings of being a phony. Share these feelings with others and combat the fear of being discovered as a fraud.

Reflect on accomplishments. Motivate ourselves to believe we can do it, we can give the lock note at DDD Sydney, and we can get that Senior position!

The battle with impostor syndrome is an ongoing one. Just remember to recognise, rationalise and reflect.

Watch my full talk, Battles of an Impostor, from DDD Sydney 2019:

NEXTKeeping up in a Pandemic
Search